The dark-red, elaborately ornate building is hard to miss when passing through Freiburg’s Münsterplatz.

Waiting in line in the Middle Ages – for merchants that meant waiting with one’s wagon at the city gate after a difficult journey. The city gates were where merchandise was inspected and a customs duty applied. This could take some time, especially with the significant increase in trade in Freiburg in the 14th century. The city gates were literally bursting at the seams, making it absolutely essential to create a designated place for storing goods and issuing customs clearances. The first official mention of such a city market administration building dates back to 1378.

In the early 16th century, sometime between 1520 and 1532, the Cathedral master builder Lienhart Müller extended the original structure with the construction of the Historical Merchants' Hall. The building stands slightly in front of the line of neighboring structures, showcasing its sumptuously decorated turrets and arcades.

Behind the wide entrance lies a large 300-square-meter inner courtyard. Once a merchandise storage area, the space is now used for outdoor events, such as the “Freiburg Weinkost” wine tasting.

A spiral staircase from the courtyard leads up to the Kaminsaal. The addition of a fireplace in the 15th century by the cathedral master builder at the time gave the room its name of 'Kaminsaal' (fireplace room).

While the ostentatious Kaisersaal (Emperors’ Hall) impresses visitors with its massive oak columns, the virtuoso 18th-century ceiling ornaments in the Rokokosaal (Rococo Room) create a beautifully majestic focal point above.

Tip: The impressive rooms of the Historical Merchants' Hall can be visited only during regularly scheduled events. Plan to attend a reading or a concert by the SWR Symphony Orchestra.

Short note: Martin’s Gate can only be viewed from the outside! 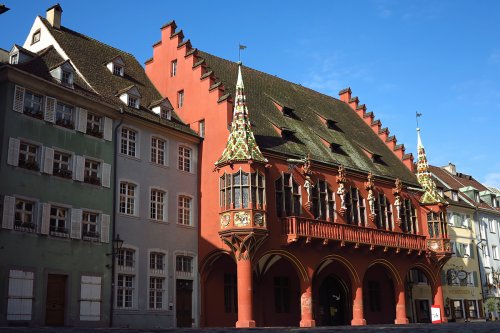