The earlier version of today's Old Bridge was made of wood. As it was repeated destroyed by war and floods, the Prince Elector Karl Theodore decided to have a stone bridge built across the river (1786-1788).

On the city end, you have the Medieval bridge gate, which was part of the city ramparts. On 29th March, 1945, one of the last days of WWII, German soldiers bombed Heidelberg's Neckar Bridge and Old Bridge. Thanks to broad-reaching support and donations by the citizens, reconstruction of the bridge could begin quickly on 14th March, 1946 and it was inaugurated on 26th June, 1947. The statues in both oriels of the bridge of Price Elector Karl Theodore and Pallas Athene were made by Franz Konrad Link, the sculptor of the Palatinate court. On the northern bank, you have the bridge construction chief Johannes Nepomuk.

There was a monkey at the Old Bridge back in the 15th century as well. Visitors coming to Heidelberg could not miss the fact that everyone entered the city on this bridge. Since 1979, a bronze statue of a monkey has stood on the south side of the bridge and it is now a favourite photo spot. 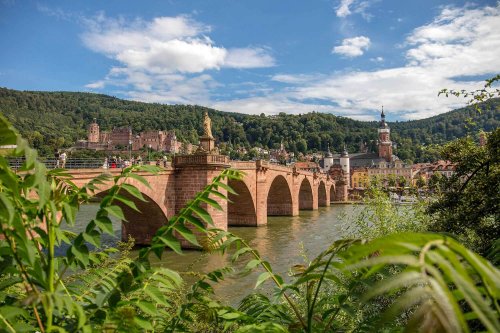