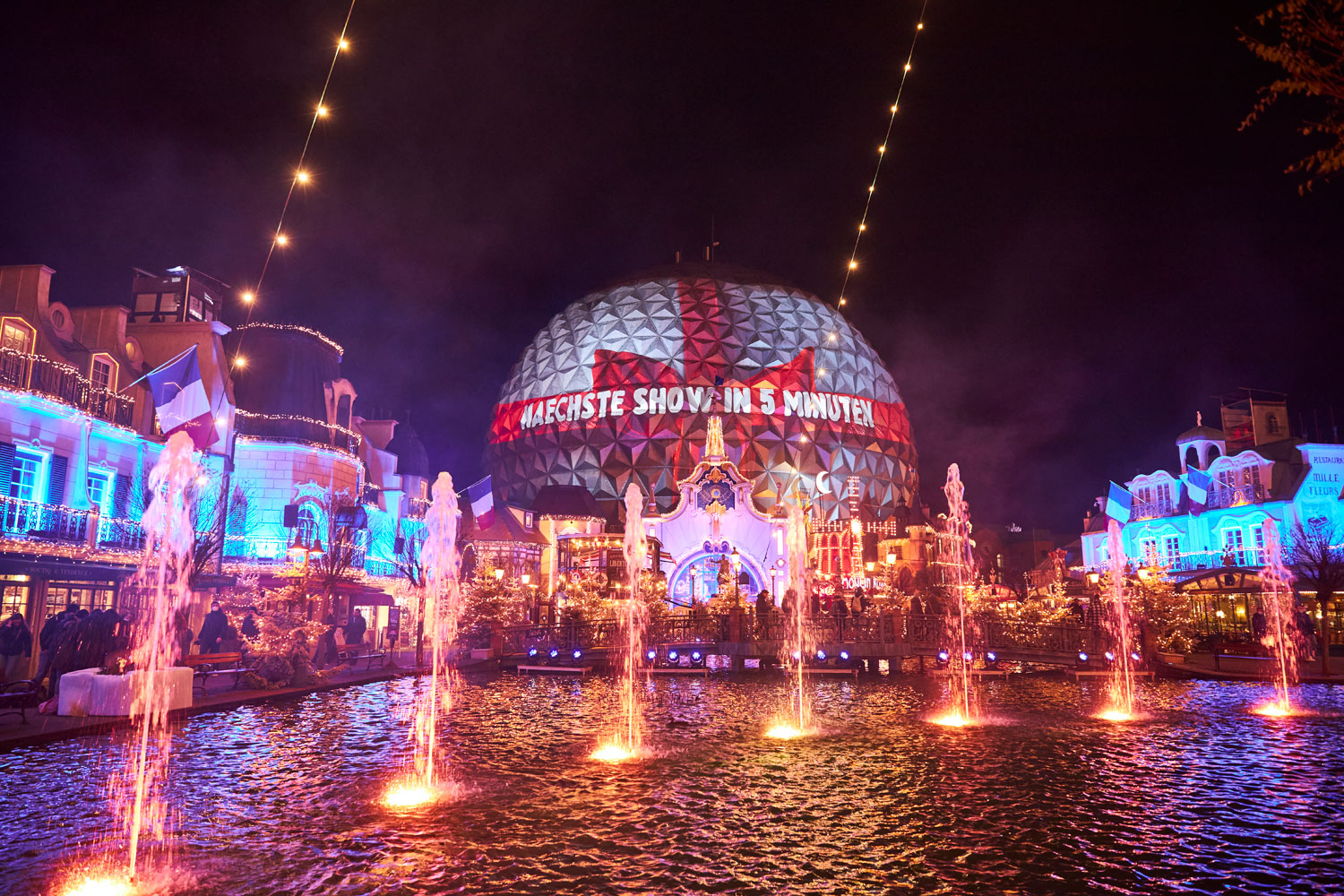 The ultimate family tradition: in autumn or winter, we go visit Europa-Park. The whole family, so that’s Mum, Dad, Lucas, Emma and me. I think this is the ideal time of year to explore the park. I’ve counted to check: I’ve been to Europa-Park ten times, that’s every year since I was five. I’ve written about all the things we did there this year. As you will soon see, one weekend is nowhere near long enough.

A Packed Winter Day at Europa-Park

A Packed Winter Day at Europa-Park

8:30 am:
“Yippee! Today we’re off to Europa-Park.” A quick check for us kids: “Everyone ready for massive fun?” Never are the back-seat passengers in such agreement as when we are heading to Europa-Park. Even Emma and Lucas scream “Yeees!” at the tops of their voices. So, we turn off the motorway and into the park. Quick check with the parents: “Have you got the Europa-Park app?” Dad says: “Of course”, I’ve used it to check today’s show times and plan our visit to some fantastic events. Emma, Lucas and I are pretty amazed, and our excitement mounts! Mom is just turning into the parking lot. As far as I’m concerned, this is where things get started. We quickly drop our bags at the hotel and off we go.

10:00 am:
Open Sesame! We are hotel guests, so we are allowed into the park an hour early. We know exactly where we are heading first: to the big wheel. This is kind of a family tradition. We've been doing the same thing since I was tiny. From the top we can see everything, including some stuff we didn’t see last year. It’s completely mad, but the bigger I get, the higher the wheel seems to be! Dad absolutely insists that it’s the same size every year. Precisely 55 metres, according to him.

11:00 am:
The rollercoasters are up and running — the ones that are open during the winter season. We spotted them from the big wheel. Awesome!! We've been promised three of the thirteen rollercoasters. And a promise is a promise. Here’s what we do: each of us chooses one, and the others join for the ride. Another family tradition. Everyone except Dad that is. Every year Dad has a different excuse. But someone has to stay on the ground. Emma gets the first go. She chooses the bobsleigh run. So we start in the Swiss themed area. Bobsledding is such fun. It feels quite different than on rails. It’s wicked how you sense it going back and forth.

11:30 am:
We are on a roll! So it’s straight over to the Blue Fire Megacoaster. This is insane! There’s the door. With the word EXPLOSIVE on it. And bang! We shoot out into the fresh air. This year Emma joined us for the first time. Honestly, I thought she would be wailing after the first bend. Or at least once we started doing loops. But far from it! She wanted to do it all again. That was way too short, she reckoned. To be fair, I have to agree with her.

Midday:
Now it’s Dad’s turn. He wanted to go ice skating. Hopefully the skates fit. The first few moves were tricky. But after a couple of circuits, I’ve got it. Better than Lucas and Dad at any rate. This year I managed half an hour without falling over once. Isn’t that cool!

1:00 pm:
Bon appetit! We are at the FoodLoop. It's incredible. A restaurant where the food comes to your table via rollercoaster. Completely on rails. Wow, it’s crazy! While we are eating, Mum tells us that she went on a fairy ride with Emma when we were on the ice. I might have guessed it, Emma loves fairies.

3:00 pm:
Now it’s my go! I’ve chosen the Eurosat - CanCan Coaster in the French themed area. It’s absolutely bonkers. A rollercoaster accompanied by can-can music. First it goes round the Eiffel Tower, then up and down. Even Lucas loved it, although he usually listens to very different music. Mum says at 5 there’s going to be a fantastic 3D video mapping show projected on the front of the Eurosat - CanCan Coaster. Amazing — we mustn’t miss that later.

4:30 pm:
We have seats for the big Ice Show. It’s great. I should know — I'm an expert after all. I managed to stay upright on skates myself just a short while ago. This gets a top rating from me. I'm absolutely fascinated. It’s incredible. It has to be seen to be believed. The show lasts half an hour. It flies by. As far as I'm concerned it could have been longer.

7:15 pm:
Now it’s time to head for the big lighthouse. That’s where our hotel is. It’s called Bell Rock. I think I’m actually quite tired. Not that I would ever admit it, of course. Even so, I'm looking forward to the funny beds. I'm sleeping in a boat. There are two rowing boats with mattresses, stacked one above the other. It’s so fun. Can’t wait to find out if they rock.

7:30 pm:
But first some food. We are all starving. Emma wants spaghetti. And why not! We are going to Pizzeria La Romantica at hotel Colosseo. Mum and Dad admit they already booked us a table using the app. There was no way Emma was going to bed without spaghetti. And Mum and Dad are looking forward to a drink — they call it parents’ time off. How convenient that the Bell Rock is known for its cocktails. The bar is called Spirit of St. Louis. I have promised to look after Lucas and Emma. But it’s no big deal. They are already fast asleep. And by the time Mum and Dad arrive, I’m enjoying sweet dreams too.

A Day of Adventure in Rulantica with a detour to YULLBE

Day Two: Virtual worlds, above and below water.

A Day of Adventure in Rulantica with a detour to YULLBE

8:30 Uhr:
Breaaaaaakfast! Hi there! What a hoot sleeping in a boat! Lucas loved it too. He wanted to go to the Castle Hotel Castillo Alcazar. Playing knights. It wasn’t easy to choose. But I got my way in the end. And now he won’t admit that the boats were actually quite cool.

10:00 am:
Into the water. Lucas loves swimming and wanted to visit the Rulantica water world. I didn’t let on to him that I was pretty keen too. A morning in the water. Brilliant. Even though it was winter, I swam outside, and it wasn’t even cold. I barely saw Lucas. He spent the whole time on the slides.

10:30 am:
In Rulantica there is also a city on stilts. I’ve never seen anything like it before. The best thing is how you get down again. I even dared to go on the Dugdrob. The best way to imagine the Dugdrob is like a large pipe. You climb in at the top. Then you hear a countdown. And suddenly the ground is whipped out from under your feet. Down it goes. You pick up speed in an instant. The Vildfål works in a similar way. Maybe even more extreme. It’s like a pneumatic tube. Megaspeed. You need nerves of steel.

11:30 am:
So much to do: I did virtual snorkelling. Known as Snorri Snorkling VR. VR stands for virtual reality. You put on some snorkelling goggles, head below the surface, and swim through an underwater world. Virtually at least. Always following the Rulantica mascot Snorri. It’s brilliant.

Midday:
Mum is coming back from the sauna. It’s called Hyggedal. She absolutely raved about it. Must be a fantastic sauna and relaxation area. I’ll be honest, I hadn't even noticed that she was gone. But she said she felt completely refreshed. And I told her all the places I’d been. By this point, Lucas had appeared again. We head off to Stormvind together. Lucas wasn’t brave enough to go alone. I take him with me.

1:00 pm:
Hunger, hunger, hunger. Good thing you can eat well in Rulantica. For example, at Lumålunda. Like in a stalactite cave. I even mixed my own drink. Delicious. Everyone is full and happy.

1:30 pm:
Emma and Mum are spending the afternoon in the Rulantica children’s area. There’s loads of space there to splash about. It’s perfect for Emma. She is thrilled with the Tommelplums, Kullerbuller and Schabernakker kids’ slides. We say goodbye because we have our own plans. I'm so excited. As fans of adventure, we want to try out something completely new. It’s called YULLBE. It’s super crazy. But first we need to dry off and blow-dry our hair.

2:30 pm:
I don’t exactly know what’s ahead of us. I'm going to be shrunk! It’s a bit nerve-racking. Me and Lucas are doing “The crazy shrinking tour”. Dad’s coming too. Bang on schedule, we are at the entrance to YULLBE, Europa-Park’s virtual reality world. It’s so exciting! First, we slip our arms and feet into the feet and hand trackers, next we put on a backpack containing a whole load of technology. Finally, we put on a massive helmet with glasses - and we are ready for our trip. “The crazy shrinking tour” is the name of the experience.

2:45 pm:
Wooooooah! I am absolutely tiny! Just one centimetre tall, I think. Is that Lucas next to me? Lucas? It is. We are standing next to each other in a miniature world. Just like figures in a mini railway. Dad is next to us. Ha! He’s the same size as we are. Anyway, I don’t want to give too much away ... but that is a proper adventure. I will never forget it.

3:30 pm:
I am totally wowed by the miniature world. What a shame it’s all over already. I really don’t want to pack my bags. I write down on a piece of paper all the things I want to do next time.

4:00 pm:
One weekend definitely wasn’t enough. Really, we should come here more often. There is so much to explore. I can’t wait to find out what my parents think about that suggestion. For next year. Emma, Lucas and I have already made our minds up.

More tips for the winter months

🌟More Information about the Europa-Park Resort