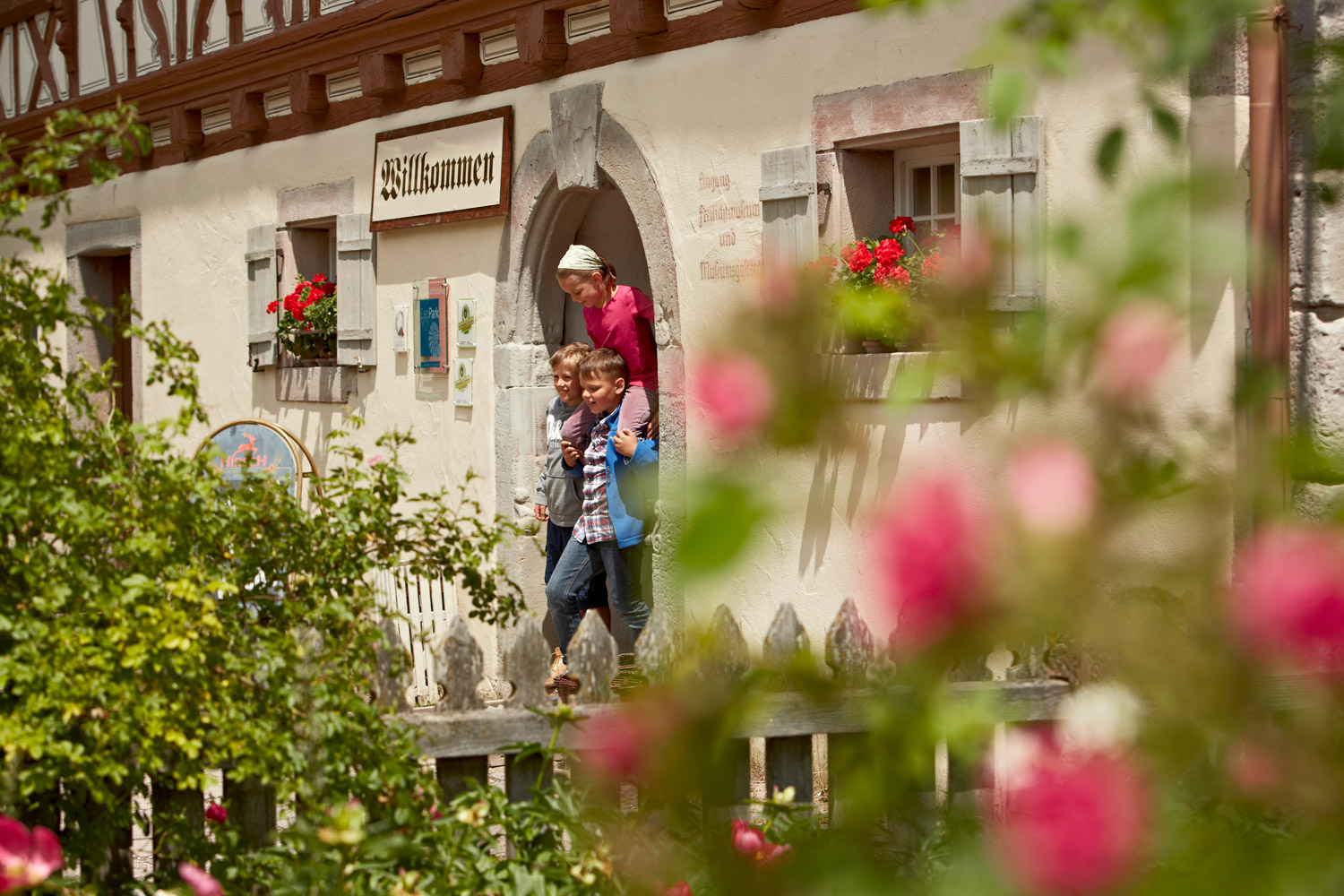 Here’s the dilemma: you want to visit a museum, but it’s a beautiful day and the sun is shining. What to do? In SouthWest Germany, the solution is easy. You can enjoy great weather and take in a museum! The choice ranges from living history and nature to contemporary art. Go in and out of historic homes; walk through parks, woodland and villages recreated from original historic buildings. Breathe in the clean fresh air; get some exercise both for your body and your mind. There is no better way to spend a culturally-oriented summer’s day.

☀ Here are 9 of our favourite outdoor museums for this summer in SouthWest Germany:

Learn about local history in 70 historic buildings. An hour northeast of Stuttgart.

SouthWest Germany’s largest open-air museum is full of surprises. In Wackershofen in Hohenlohe, 70 historic buildings from the 16th to the 20th century have been moved here, rebuilt and restored to create a village, complete with farmhouses and inns, mills and barns, a chapel, a schoolhouse, a train station and even a prison. And the village is “alive”: craftsmen demonstrate traditional skills; ancient breeds of farm animals graze in the fields; the mill grinds wheat. And bakers bake bread that tastes as good as it looks!

The Klima Arena. Look into the future.

The Klima Arena. Look into the future.

Explore the future of Planet Earth. 90 minutes northwest of Stuttgart.

In Sinsheim’s Klima Arena (Climate Arena), we can see today what the world will look like tomorrow. This innovative, hands-on, themed museum focuses on climate change and renewable energy. It is aimed at children and young people as well as families, schools and climate change enthusiasts. Travel through time, starting with a virtual glacier; use the interactive Climate Wall to find out more about climate and the greenhouse effect. See which animals and plants are native to moorland, forest or meadows – and how they are coping with climate change.

The Klima Arena in Sinsheim

SouthWest Germany’s rural past comes to life. An hour southeast of Stuttgart.

Step back in time to the Old Days at Beuren Open-Air Museum. Rebuilt in the grounds are 22 historic buildings, ranging from a 15th-century barn to a 19th-century mill and washhouse. See how people really lived; go into homes; learn how they cared for sheep, chickens, goats, geese and rabbits. Watch weavers and bakers at work; visit the Tante-Helene-Lädle, Auntie Helene’s village shop, a treasure trove of typical toys, sweets and kitchen utensils from the 1930s.

The Open-Air Museum in Beuren

One of Germany’s great private collections. An hour northeast of Stuttgart.

Stroll among 30 works by world-famous artists, such as Eduardo Chillida, Anish Kapoor and Henry Moore in one of the world’s great sculpture parks. Admission is free and the lively audio guides, like an art podcast, provide the background to what you see. These sculptures and installations are the legacy of industrialist Reinhold Würth. More of his fabulous art collection is indoors, in Museum Würth and the new Museum Würth 2.

The Museum Würth in Künzelsau-Gaisbach

The Black Forest Open-Air Museum Vogtsbauernhof is like a time machine, whisking you back to the days when people made their own bread, shoes and horseshoes, hats, brushes and baskets. Among the 22 authentic old buildings is the Vogtsbauernhof, a farmhouse built in 1612. This living history village is a great way to learn about the Black Forest – and great fun for children, who can even help to churn the butter! The museum is easy to get to by car (B33) or on the Black Forest Railway, where it even has its own station, Gutach Freilichtmuseum!

Discover why the Romans loved the Swabian Alb. 90 minutes southwest of Stuttgart.

If you find it hard to imagine Roman life while peering at Roman pots and shards in a gallery, head for the Roman Open-Air Museum in Hechingen-Stein. On the site of a Roman settlement, a country villa has been carefully reconstructed to show how Romans lived 2,000 years ago. New as of 2021 is the reconstructed temple complex, with its surprisingly bright decoration. As well as statues of Roman gods, pots and artefacts excavated on site, there are demonstrations of Roman battle techniques and hands-on activities, such as laying mosaics and baking bread. For little ones, there is even a Roman themed playground.

In the Stone Age and Bronze Age, people in this region lived in “stilt houses” built over the shallow edges of lakes. We know that thanks to the discovery of wooden piles preserved in the bogs of Upper Swabia. Now, on Federsee Lake, you can see reconstructions of these homes and learn why they were built over the water (for defence and safety). Hear about the geology, archaeology and biology of the lake and details of daily life 4,000 years ago. All round is a wildlife conservation area, with 265 species of birds.

When you arrive, the village is spruced up and ready for you – every visitor is treated like a special guest. That atmosphere makes this living history museum special. Among 25 historic buildings, the school, the shop and the town hall are all open. The cottage gardens and the orchards are neat and tidy. Geese cackle; ducks swim in the village pond; women are busy with spinning; blacksmiths hammer horseshoes; at the buzzing sawmill, a waterwheel provides power. This is how people lived and worked in the rural regions of the Swabian Jura, in the Black Forest and on Lake Constance. And they were more high-tech than we might think!

In the 6th century BC, when ancient Rome was a small village on the River Tiber, the hilltop settlement of Heuneburg was in its heyday. Set high above the Danube, this is one of the most important Celtic archaeological sites in Central Europe, with reconstructed defences and buildings. Excavated objects reflect trading links with distant cultures: amber from the Baltic Sea, jewellery from Slovenia, amphoras for wine from Marseilles. Experts think that this was the legendary Celtic city of Pyrene that was mentioned by the Greek historian Herodotus 2,500 years ago. TIP: Walk the 8-km / 5-mile Heuneburg circular hiking trail.