A time for every clock 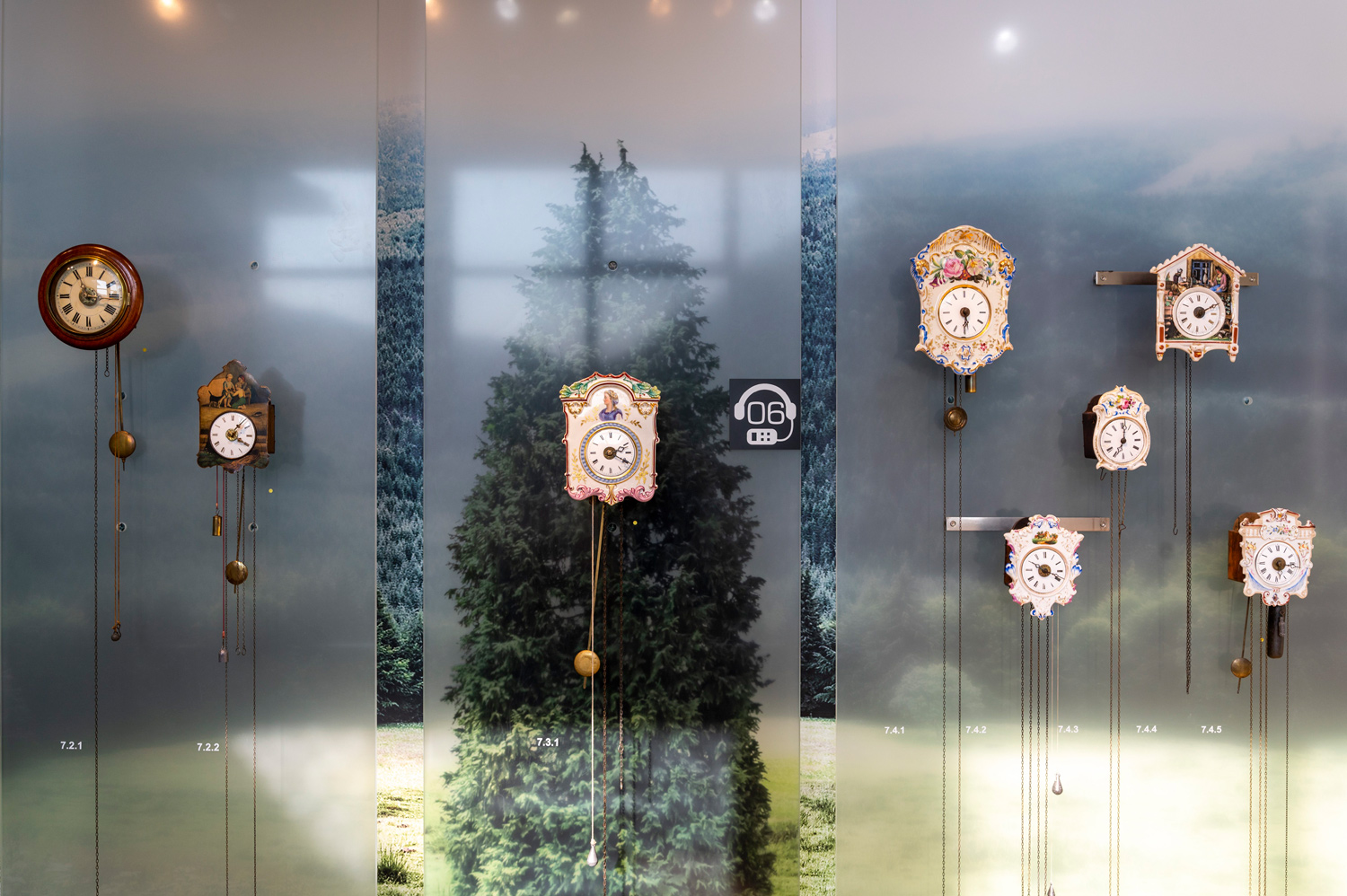 A journey through the history of clocks in the Black Forest

When you walk through the tranquil Black Forest, it’s hard to imagine that time once played so great a role in this idyll. The Black Forest clock industry boomed, and not only because of the famous cuckoo clock.

Dust dances in the sunlight. The air in the workshop is warm and dry, and smells of wood. Cuts of lime wood are stacked against the wall and the floor by the workbenches is covered with wood shavings. Wherever you look, you see wood in the process of being transformed into clocks, figures and houses.

Christophe Herr is sitting in the upper storey of his workshop in Schonach im Schwarzwald, and focusing his attention on checking a clock mechanism. If he has bent one wire incorrectly, this could mean that the music doesn’t play, or the cuckoo doesn’t come out of the door. “It works!” He nods happily, presses the back cover of the clock into the casing and carefully hangs it on the wall. Christophe learned his trade from the best – his dad and grandpa. And they learned from their ancestors, Christophe’s family has been making cuckoo clocks since 1868. He is the fifth generation to keep the tradition alive. And why cuckoos? Like the clockmakers before him, Christophe Herr does not produce the individual parts of the clock mechanism himself. Although they are made by a specialist company today, they were originally produced by local farmers in their yards, to supplement their scanty incomes from agriculture. Even now, there are several clock suppliers based in Schonach. The chimes,for example, which make the typical cuckoo noise using bellows, are crafted only a few hundred metres away. You can buy the clocks online or in Christophe’s shop, which is in his house next door to the workshop. What he is currently working on hangs in the wood-decked room: beautiful pieces in different shapes, sizes and colours of wood. He designed most of these models himself, but some are inspired by clocks that his grandpa designed. “I think it’s important to revive all motifs,” says the qualified wood sculptor. “Our craft has such a long tradition and history that it would feel very wrong to make modern clocks.” The story of how the Black Forest discovered the cuckoo clock is probably told slightly differently in every clockmaker family. This is how Christophe’s family tells it: the cuckoo clock was invented in 1737 by Anton Ketterer in Schönwald, a village only a few kilometres from Schonach. Originally, a different animal was meant to announce the hour. But its call required too many tones, so a decision was made to use the two-tone cuckoo instead. Maybe Christophe will let slip which animal this was during his tour of the workshop.

When she’s asked about the history of the cuckoo clock, historian Eva Renz has many anecdotes to relate. The cuckoo clock mechanism was definitely not invented in the Black Forest, she explains in the German Clock Museum in Furtwangen. “It is very old and was likely developed in Italy in the 16th century.” One of the earliest cuckoo clocks is said to have hung in the art chamber of Johann Georg I, Prince Elector of Saxony, she reveals, but unfortunately we know nothing about what it may have looked like. Approximately 100 years after cuckoo clocks first appeared in Saxony, they made their debut in the Black Forest. The German Clock Museum in Furtwangen has an enormous collection of Black Forest clocks. Of the 1,300 on display, a mere 30 are in operation. On one of them is mounted a 1.8-metre (almost 6 feet) long cuckoo, whose call echoes through the open-plan museum every 15 minutes. Eva Renz stops in front of a wall almost entirely covered in wooden clocks. Clocks in every shape and size and with every imaginable decoration hang here. Some have a metal pendulum behind glass, some have elaborate little towers and tips, others are brightly painted. Some even strike the hour and a couple dances round them. “The clocks give a real insight into the landscape that the clockmakers used to live and work in,” the clock expert enthuses. “I love it when visitors see the Black Forest through new eyes after coming to the museum. Because for us, figuratively speaking, it’s not just the clocks that are important, but also a particular view of the Black Forest and of how the people here used to live.”

To continue the story: in 1850, the cuckoo clock finally found the form in which it even today travels the world as the Black Forest’s envoy. Robert Gerwig, the founder of the Clockmakers’ School in Furtwangen, launched a sort of design competition at that time. The most successful design was by an architect, who shrank a signalman’s house, decorated it with ivy, added a clock face and put the bird in the attic. Incidentally, although the cuckoo clock is iconic for the region, it wasn’t the Black Forest’s most successful clock, but constituted maybe three to five percent of total production output. The lacquer plate clock, a flat wall clock with a brightly painted face, was the major export. It was produced in the 19th century and occasionally travelled as far as China. It was one of the first everyday clocks and was affordable even for average earners. The everyday clock also brought worldwide fame to Junghans. The Schramberg-based company began to manufacture alarm clocks in the late 1870s and proved so adept that it was the world’s largest clock manufacturer by around 1900. At its peak, the company was producing 9,000 clocks per day.

It isn’t just the alarm clocks that are famous; so is the production facility itself. In 1917, the Junghans Brothers constructed a step-shaped building with long narrow rooms and enormous windows, so that the precision mechanical work could be done with the best possible light. Although production ceased in this special building in 1970, Junghans as a company still exists today. The building, which is protected by a preservation order, now houses the Junghans Terrace Museum. Over 300 exhibits tell the story of Black Forest clocks and Junghans, the company that made them, and the region’s then suppliers. The history of Black Forest clocks only comes to a provisional end here. The cuckoo clock still exists and is as popular as ever, thanks to people like Christophe Herr.

The German Clock Route winds its way from Freiburg to Rottweil right through the dark-green woodland of the mid Black Forest and back again. For 30 years now, the 320-km (nearly 200 miles) long route has connected 36 municipalities in which clocks played an important role, both then and now.