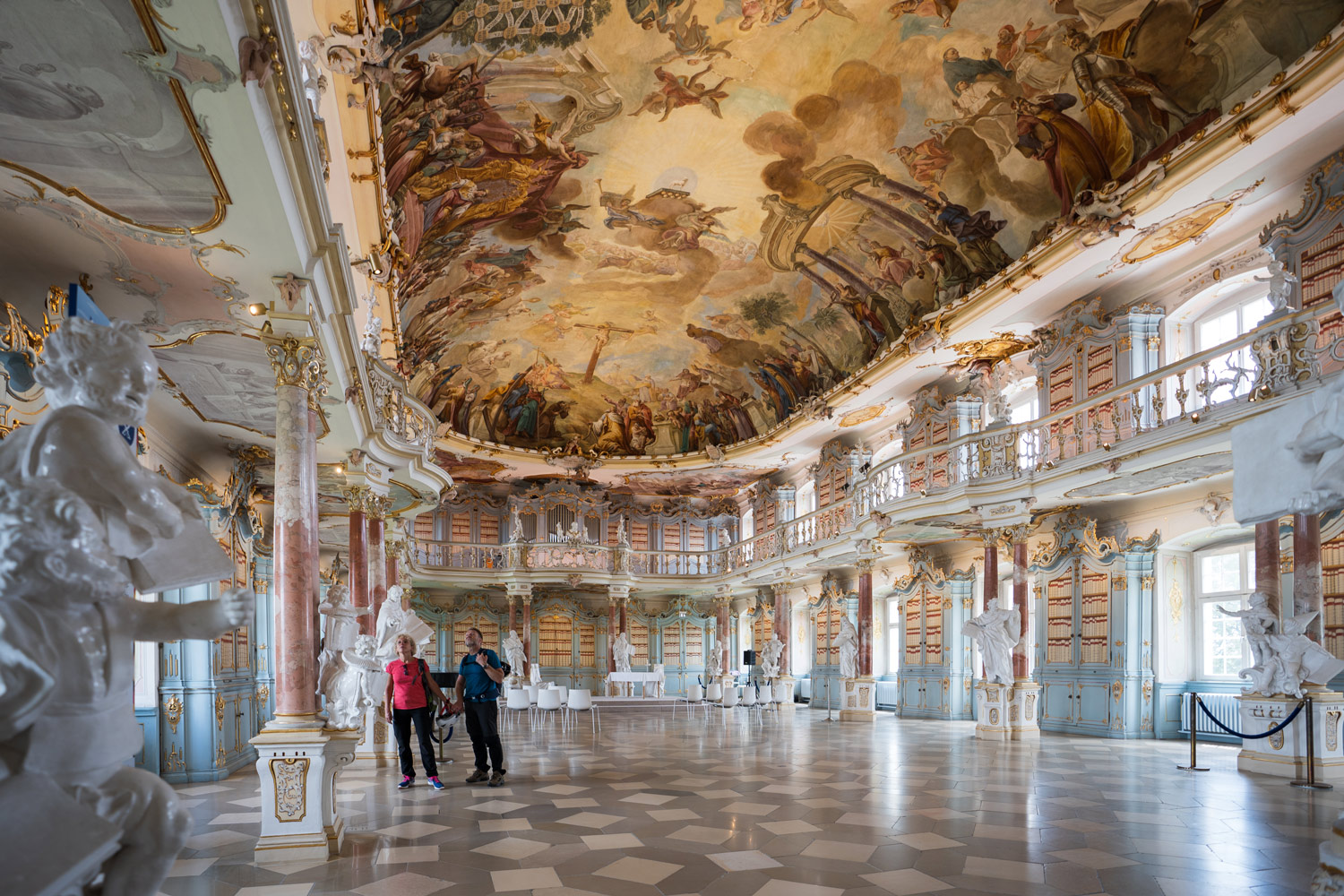 A journey on the Upper Swabian Baroque Route

Great works of art and a connoisseur culture to enjoy: experience all this and more on a cycling tour along the Upper Swabian Baroque Route.

Are books really all that is important here? The magnificent library in the former monastery at Bad Schussenried naturally tells many stories at once: about the human desire for knowledge, the monastery’s wealth in the 18th century and the skill and talent of the two artists who created the room, painter Franz Georg Hermann and sculptor Fidelis Sporer. Between them they created a rococo gem, in which the pictures, colours and sculptures almost make the bookshelves swing and vibrate.

The famous room is one of the main attractions of the Upper Swabian Baroque Route, which connects approximately 55 baroque places of interest over 860 kilometres (around 535 miles). And if you prefer to travel through this hilly landscape at a slower pace, you can follow one of many cycle routes for its Baroque treasures, such as the Upper Swabia-Allgäu cycle trail between Aulendorf and Bad Saulgau.

A weekend in the Baroque. Zest for life. Yearning for death. Transience. Celebrate life or renounce worldly pleasure? The Baroque was definitely a time full of stark contrasts, but that is exactly what makes it so fascinating. Nowadays, Upper Swabia prefers to concentrate on the lifeaffirming aspects of the period, which was badly shaken by the Thirty Years’ War and the conflicts arising throughout the Reformation. Listen to the tones of Baroque organs, take photos of putti and angels, enjoy Upper Swabia’s cuisine and cycle effortlessly on an electric bike through the cultural landscape of chapels and tree-lined roads. In Aulendorf, where the tour starts, Doris Schenk, alias Countess Paula, chats as she guides the castle’s visitors through her daily life in the 1880s.

Bad Schussenried welcomes cyclists at that unique library, in which you decide to read more on the spot. And Siessen Convent in Bad Saulgau is fascinating – because nuns still live there, even today. Sister Emanuela guides culture-lovers through this tranquil world shaped by women – the convent church of St Mark and the exhibition of the works of Sister Maria Innocentia, born Berta Hummel, and her drawings of sweet, stylized children that became the basis for the famous Hummel figurines.

Later, in the St Francis Garden, you can listen to the saint’s Canticle of the Sun and visit some of the stations created a few years ago to invite you to reflect: a human sundial, a spring, a labyrinth, Brother Death, ponds, a herb garden, a beehive. Light and shadows, endings and new beginnings. In essence, the contrasts of the Baroque shape our lives too.