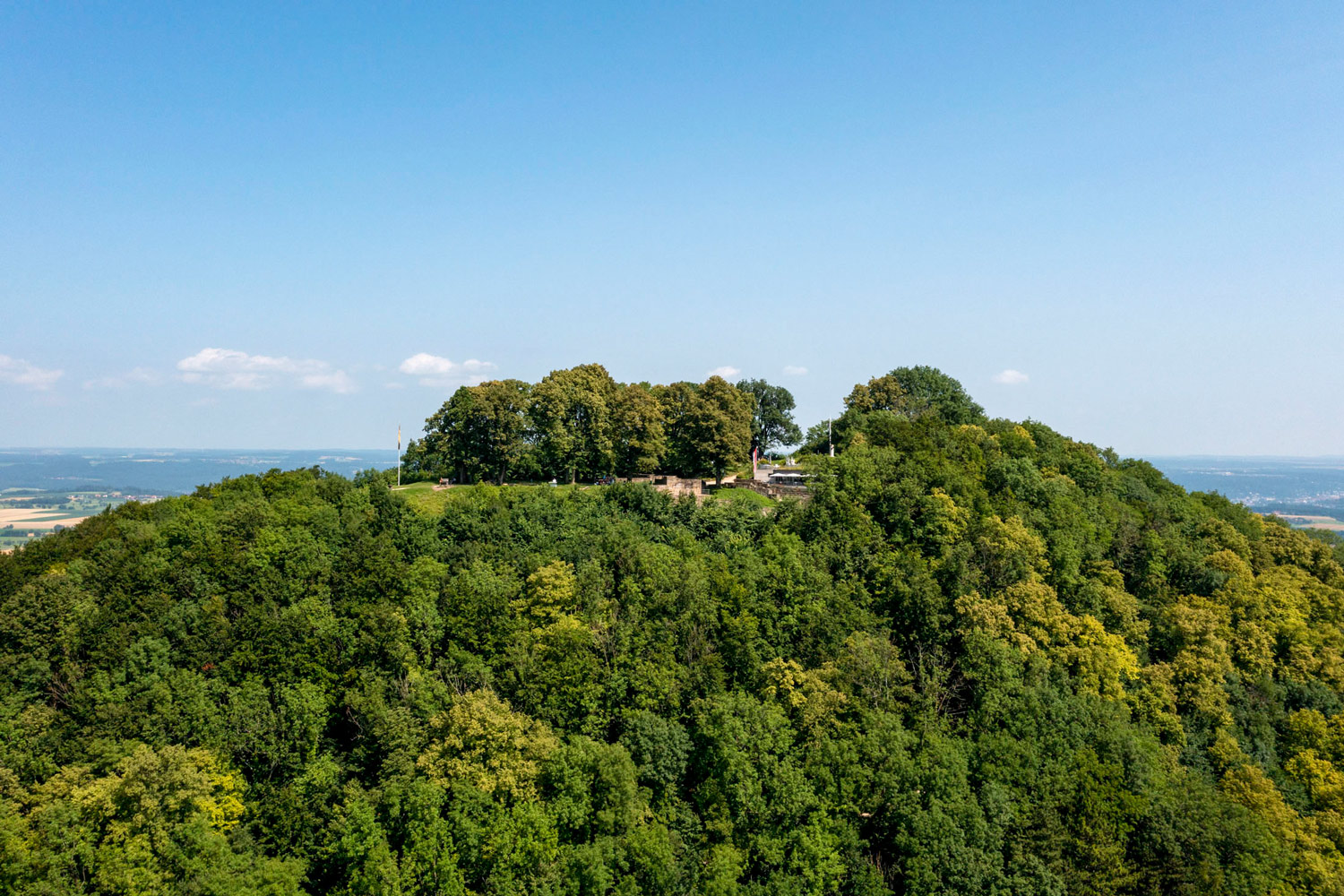 Conquer the peaks, walk through the valleys: a hike in the Swabian Alb along the Staufer Circuit, which follows in the footsteps of Swabia’s most powerful noble family

This is where it was. The Staufer family seat once stood right here, but even the ruins are barely visible now. The view from Hohenstaufen extends far over the Swabian Alb and the district of Göppingen. Two other conical mountains rise up like islands from the sundrenched landscape: Rechberg and Stuifen. Together, these three are known as the Three Kaiser Mountains, and Hohenstaufen is the best known. There is a magnificent view of the other two from its summit. When you’re up there, your everyday concerns seem far away, and you feel unassailable, maybe even lost in reverie. Maybe this was one of the reasons why the Staufers chose this place for their seat. In any case, when you walk the Staufer Circuit and climb Hohenstaufen, a world full of broad perspectives and symmetrical shenanigans lies at your feet. Some of them were formed naturally, by erosion, the conical buttes (isolated eroded hills) among them. For others, people – the Staufers, to be precise – had a hand in it. At the foot of the mountain stands defiant little Wäscherschloss Castle, which probably belonged to the Staufers once, too. The medieval fortress looks like a toy castle and its inner courtyard is trapezoid in shape, creating a fantastical effect. Coincidence?

Welcome to the world of the Staufers, whose most important scion – Emperor Barbarossa – celebrates his 900th birthday this year. In short, the Staufers were the mighty Swabian noble family who rapidly climbed to the apex of power in the mid-12th century in Europe, and produced several Holy Roman Emperors. Just as quickly, the family disappeared from the stage of world history 100 years later. Their origins are found in the Swabian Alb. The Staufer Circuit path is a good eleven kilometres (almost seven miles) long, which means that you will not just enjoy the cultural landscape of the Swabian Alb during your hike, but also take a small but exciting journey through time. So let’s start at the beginning. The tour starts at Wäscherschloss Castle in Wäschenbeuren, then leads through the spectacular Beuten Valley and later onto a sunny path over the Spielburg nature reserve up to Hohenstaufen.

From there on the path back leads downhill. If, before starting your hike, you would like to immerse yourself in the Staufer era, visit Wäscherschloss Castle and the local castle warden Krisztina Mutter, who loves to chat with visitors about the day-to-day culture in former times: which cereals were cultivated, what people ate and how they slept. The wall around the building, made of rusticated cut stones, is ten metres (almost 33 feet) high. The castle, which dates back to 1220, was part of the Hohenstaufen fortifications. From here, you could see the ancestral castle on the mountain, and spot any approaching aggressors. By contrast, the great hall inside is astonishingly cosy and comfortable. On the first floor, you enter a room with a large fireplace and leaded windows, where you expect the lord of the castle to appear at any moment and ask you to take your seat for dinner at the long table with deceptively real medieval food: fruit, meat and grain pottage. Above, in the room created later on the second floor, you can see as far as Hohenstaufen. The history of the Staufer family is, incidentally and to a great extent the history of men called Friedrich. A certain Friedrich von Beuren is considered the progenitor of the Staufers, but things only become interesting with his son, also Friedrich, who was permitted to marry the emperor’s daughter Agnes and was made a duke, because he had accompanied Heinrich IV on his penance to Canossa in Italy in 1077. He built the castle on Hohenstaufen and his son became Konrad III, the first German king from the Staufer family. Even today, Konrad’s nephew has a particularly illustrious name. He was another Friedrich, namely Friedrich I, known as Friedrich Barbarossa, and he became not just world famous, but legendary. He drowned while on a crusade far away from his homeland. The location of his grave is a mystery to this day. Consequently, this gave rise to the myth that the emperor is still alive and will one day return. Be that as it may, during his lifetime Barbarossa extended the Staufers’ sphere of influence far and wide. His grandson, Friedrich II, who grew up and was educated in Sicily, reigned over a kingdom that stretched from southern Italy to Denmark. Barbarossa’s grandson was also responsible for building one of the most intriguing structures of his time: Castel del Monte in Apulia, a castle in the shape of an octagon and containing many symbolic allusions – special symmetries and the astronomical data available to the Staufers at the time. The death of Friedrich II in 1250 also marked the beginning of the end for the powerful Staufer family. What actually happened at this time is complex, but in brief, the Staufers had to fight back against competition from the House of Welf, and they fought battles with the Pope. During this period, the Swabian nobles both rapidly ascended to power, and also decisively shaped Europe as it was at the time. Emperor Barbarossa and his grandson, Friedrich II, founded cities and universities, created a new legal system and promoted court culture. You can graphically visualise the Staufers’ adventures yet again in the impressive Lorch Monastery, which the Staufers also built and where important family members are buried. For example, there is an enormous modern circular painting by the artist Hans Kloss, who died only a few years ago.

The 16 Löwenpfade Trails in the region also allow hikers to become familiar with Staufer country and its landscapes. Hikers repeatedly come across the emblem of these Löwenpfad Trails, a stylized lion with a green mane on a white square, which was also hand-painted on a rock at the foot of the Spielburg. The name may suggest a defensive structure, but actually, it’s an enormous rock formation. Millions of years ago, it was part of the summit, but it was dislodged and slid down Hohenstaufen piece by piece until it came to a halt. Today the crags are home to a beautiful nature reserve. The meadows are dotted with purple sage blossoms and blue cornflowers. Gnarled trees provide shade and the air buzzes with insects and shimmers in the heat. A level walkway leads upwards to the cross on the summit and ends at a rocky outcrop. From here you can scramble down steep paths along the landslip, or sit on a bench with a view of Göppingen while you summon up the strength to climb Hohenstaufen. It’s not that far from here, and the path varies. Sometimes it runs smoothly, parallel to the mountain, sometimes it winds steeply upwards. As you follow it, it becomes quieter, cooler, greener. Unexpectedly, when you reach the end, you find a clearing at the summit. It almost seems that every step has taken you a little further away from the real world at the foot of the mountain. Up on the peak, however, things are happening: a hiking group stands on an almost threemetre (ten feet) high marble Stauferstele – a commemorative standing stone, many of which can be found in places with Staufer connections. A couple say “I do” by the ruins of Staufer Castle, and the scent of Swabian Maultaschen dumplings wafts from the “himmel & erde” inn. We stand to one side, enjoying the view of Rechberg and Stuifen. Like Hohenstaufen, they are isolated conical hills in the Swabian Alb. Known as buttes (pronounced ‘byutes’) in geology, such hills are parts of a mountain range broken off by erosion. And these three hills are witness to a history that still fascinates us today.