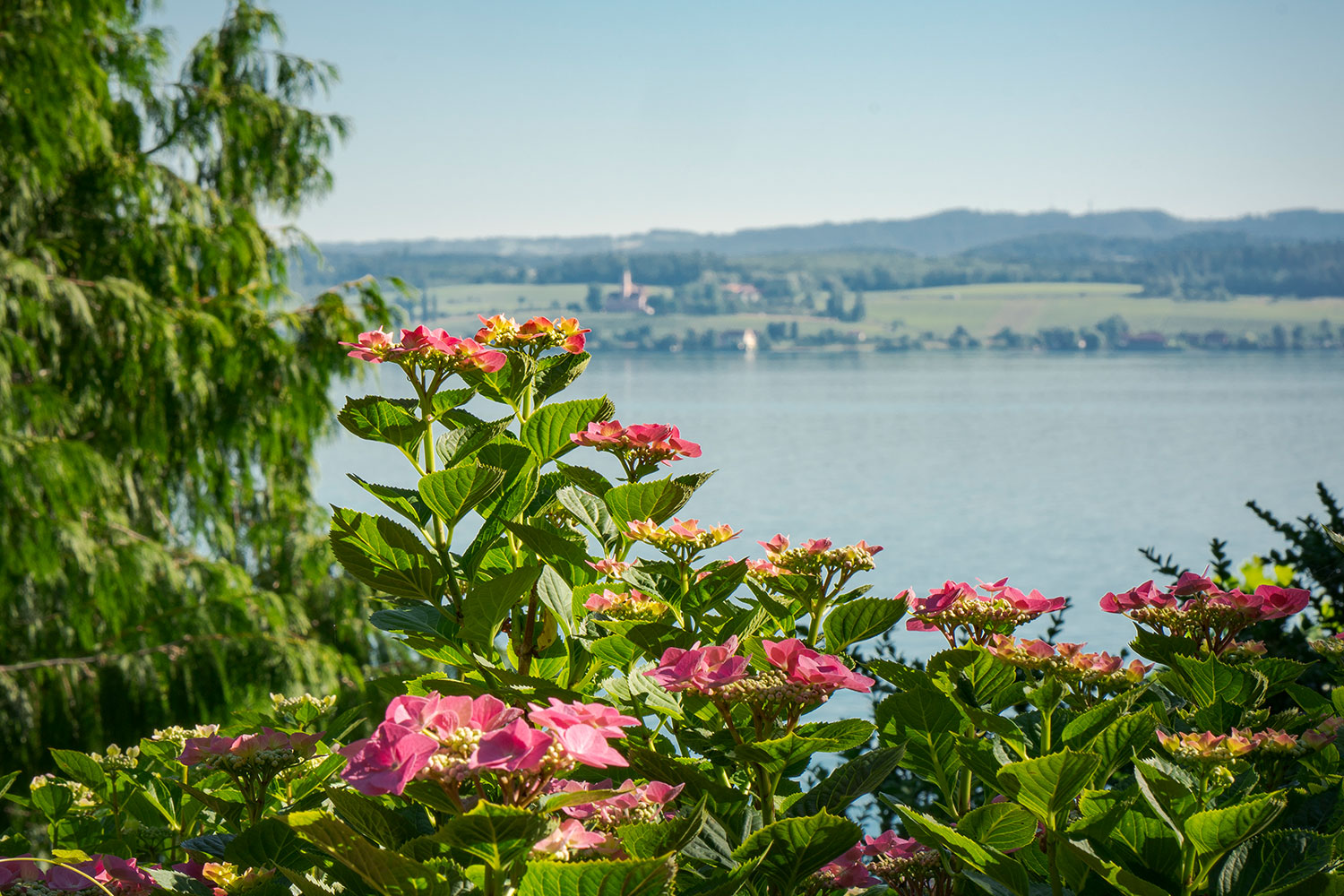 On Lake Constance, the mild Mediterranean-like climate is perfect for landscaped gardens, spectacular flowers and colourful shrubs all year round. Welcome to the land of Green Fingers!

On the island of Mainau, all is quiet. Just before eight in the morning, only a handful of visitors are wandering through the extensive gardens. The gates open at sunrise, but it is not until late morning, when the coaches and excursion boats arrive, that Mainau becomes busy. And the gates stay open until sunset.

The story of the island’s transformation began back in 1853. Duke Friedrich I of Baden had bought the island with a plan to use it as a summer residence. From his trips abroad, he brought back rare species; he planted lemon, orange and palm trees; he created an Italian rose garden and built an orangery. The heart of the island was the arboretum that today has more than 250 different species of trees. The 150-year-old Sequoias stand about 150 ft / 45 m tall. Even on hot days, it is cool in the shade of this green canopy. By contrast, in the butterfly house, countless butterflies flutter around visitors in the near-tropical heat and humidity.

The island has been open to the general public since the mid-1930s, when Count Lennart Bernadotte lost his right to the title of Prince of Sweden by marrying a commoner. Settling here with his family, he made the design of the Mainau Island gardens his life's work – and a business. Today, more than a million visitors stroll round the island every year.

The water retains the heat

Towards the end of March, the new garden season is ushered in with the popular orchid show; summer brings roses and dahlias. Autumn, with its flaming colours, is yet another magnet for visitors. But Mainau not only changes with the seasons, it also has a different theme each year. In 2019, for example, the focus is on the signs of the sun, moon and stars.

On Lake Constance, special climatic conditions prevail. The lake retains the warmth of summer’s heat, so in autumn, the water cools down quite slowly. It also gives off heat, so temperatures stay mild for a long time, allowing the more sensitive plants to thrive. Altogether, Lake Constance has 79 individual gardens and parks in its “Garden Network”. As well as gardens open to the public, there are many delightful private gardens.

A private Garden of Eden

On Reichenau, another charming island on Lake Constance, Karin Böhler opens up her own “Garden of Eden” for visitors from time to time. A sign on her door reads “Bin im Garten”, “I’m in the garden”. Karin is usually tending to her dahlias, box trees or 150 rose bushes. Sometimes, but never often enough, she stops to enjoy the views from her pavilion. She tells of how, in 1999, floods washed her garden away. That gave her the incentive to realise her dream of creating a Mediterranean garden. Now, it is a wonderful, peaceful spot, where bees hum in the summer lavender. On the branches of a gnarled tree, swaying in the breeze, she hangs signs with thought-provoking quotes.

Today, visitors stroll through the Baroque courtyard garden of Salem Castle, north of Meersburg. They admire shrubs carefully trimmed in the shape of temples, pyramids or cubes; they get lost in the maze. The geometric design of the garden invites contemplation; according to Birgit Rückert, the castle’s administrator, the mazes are like a mini-pilgrimage. But in the Middle Ages, this was an important Cistercian monastery.

From useful to beautiful

The long history of the complex dates back to 1134, when the Cistercian order founded a monastery here. It was surrounded by land and well-tended vineyards. The gardens were more than flower beds. Following their belief in self-sufficiency, monks grew herbs and vegetables, and also kept goats, cows and pigs. As the monastery gained in influence and wealth, the garden was transformed into a place to relax, with magnificent Baroque parterres. With the suppression of the monasteries in 1804, Salem Abbey passed into the hands of the Margrave of Baden. The monks had gone, but the formal garden remained.