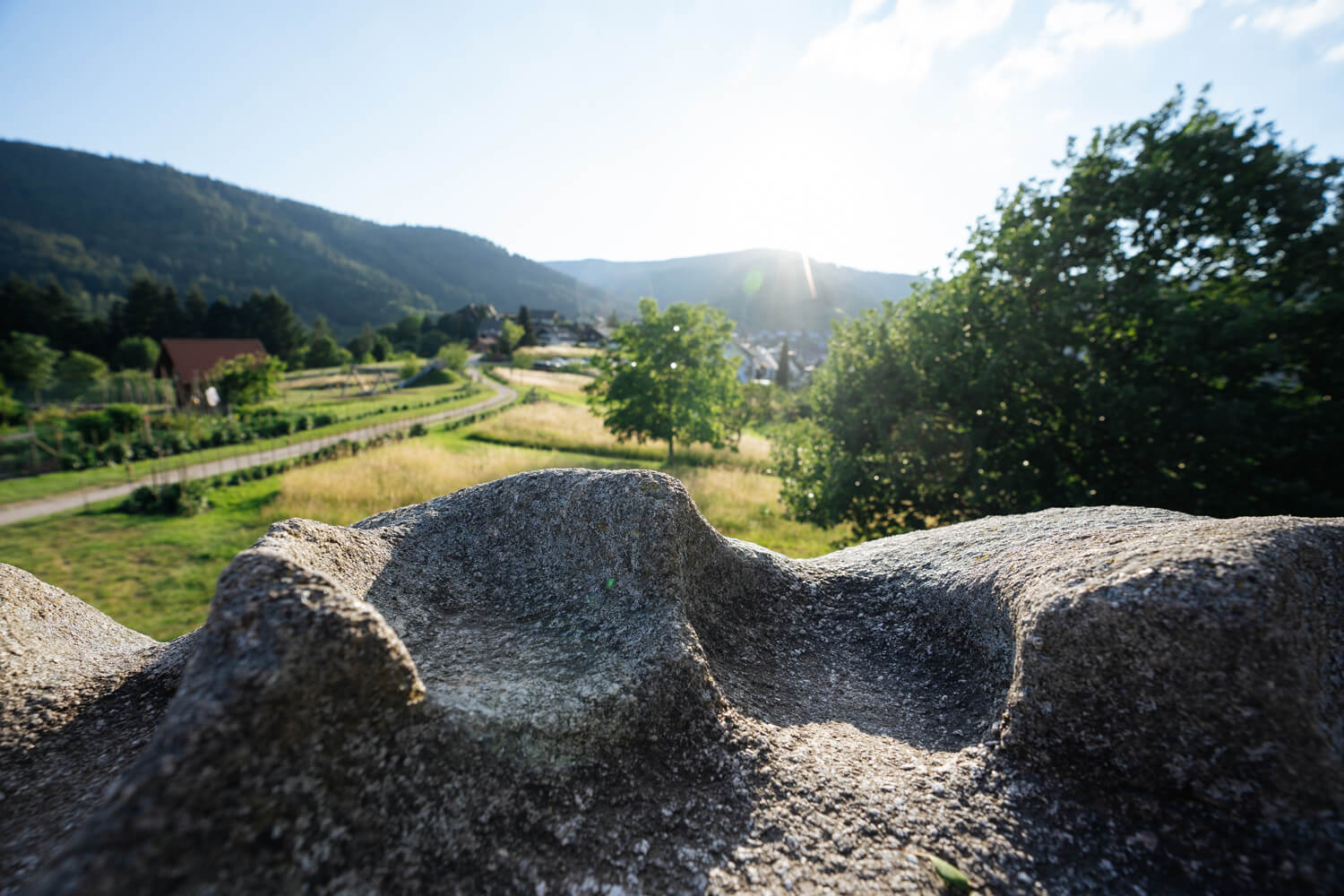 In the Black Forest landscape, mysterious boulders are swathed in legends. In the Murg Valley near Forbach, we visited what are known as the Giersteine – and discovered total silence.

Before sinking behind the Black Forest mountains, the sun sends out the last rays of the day. The granite boulders are still warm to our touch. These are the Giersteine, near Forbach in the Murgtal valley, southeast of Baden-Baden. Back in 1905, someone carved steps into the largest of the massive stones, creating a natural pulpit. Climbing up is easy. As for the view, that stretches across to the mountains and down into the Murg River valley, taking in the pretty village of Forbach. It feels as if a hush has fallen; even the bird - song is quieter. No wonder the Giersteine was designated as a natural monument in 1940.

A place of mystical power that moves you

Manuela Maer lives nearby. She is an author and sometimes comes up here at night to find inspiration. Maer, whose real name is Claudia Mutschler, is an IT expert, who also writes fantasy stories. She has incorporated the Giersteine into the plot of her latest novel, using the curious rock formations as a mystical setting. Here is a taste of her book: “All of a sudden, her father‘s body began to float. He moved gently towards the face of the rock and, when his head was above the hollow, with its deep crevices, he floated downwards. The dark-robed men lingering below the rock had begun a terrifying chant. Maledin‘s will was more and more under their spell.” While reading this extract, the light on the Giersteine has changed. The warmth has faded; twilight heralds nightfall. Suddenly, it is easy to imagine that there is a grain of truth to the mystical stories.

Black Forest guide Bernd Schneider, who often brings hiking groups here, is familiar with Maer‘s books. He also likes to talk about the old legends. There are tales of animal and human sacrifices that Celtic druids offered up to gods in ancient times; the blood drained away through deep crevices in the rock. And a story about a pagan priestess, fleeing from the Christians. When monks came to capture her, the devil himself appeared by the stones. Is this all just over-active imagination?

Bernd Schneider laughs: “Yes, probably, because geologists came to a different conclusion about the formation of the rocks years ago. They say that the miracle that created these stones is simply erosion: water and wind, heat and cold. Originally, everything here was covered with rocks, plants and earth. Over time, the earth was washed and worn away.”

What remains are the stones with their strange shapes, wrapped in lichen. And that special aura. It all makes the Giersteine a fine place to rest, relax and savour the panorama. And it is just a short hike up from Forbach railway station.

More on the Black Forest? www.schwarzwald-tourismus.info

More about the stones? www.murgtal.org