SouthWest Germany’s famous castles and palaces, such as Heidelberg, Ludwigsburg and Hohenzollern, have always been – and still are – a magnet for visitors every year. Additionally, there is more to explore: Schwetzingen palace and Meersburg, as well as the fine chateaux and manor houses throughout the area, impress visitors not only with their picturesque architecture but also often stage cultural events and festivals.

Too good to be true: SouthWest Germany's carefully maintained State Palaces and Gardens. From UNESCO World Heritage Sites and world-famous castles to glorious gardens and medieval monasteries. The SouthWest gives home to more than 50 cultural landmarks with nationwide significance.

Gardens
Choose from eight splendid gardens. Schwetzingen Palace is surrounded by elegant lawns and flower beds, but it is the sculptures – more than 100 of them – that are astonishing. By contrast, the Karlsruhe Botanical Gardens in the heart of the city, not only provide an “oasis of green”, but also historic greenhouses, rich with exotic plants.

Castles
SouthWest Germany's 10 castles are all massive fortresses that are spectacular examples of medieval times. Yburg Castle, built in 1200, is a popular day trip from Baden-Baden and is well known for its grand view over the surrounding Black Forest. Even more spectacular is the 1,100 year-old fort Hohentwiel, the largest fortress ruin in Germany. On a large rocky outcrop, the visitor can let his gaze wander from Lake Constance to the majestic snowy peaks of the Alps.

Monasteries
There are 13 monasteries. The most famous is Maulbronn Monastery, a UNESCO World Heritage Site that is one of Europe’s best-preserved medieval monastery complexes. More of a hidden gem is Heiligkreuztal, 90 minutes south of Stuttgart. Treasures include a stained glass window (1312) and the Johannesminne, a 14th-century woodcarving.

Small but excellent
Don't miss little gems, such as the Badenweiler Roman bath ruins and the 19th-century chapel on Württemberg hill (Grabkapelle auf dem Württemberg) amidst the vineyards, which are both no longer are a secret tip.

TIP
Save time and money with the Schlosscard. This pass covers all the palaces, castles, ruins, historic gardens, and monasteries and grants admissions for only 24 Euros (discounts for students, handicapped persons and others are available). It is obtainable at all of the properties and is valid for a year from its first use!

State Palaces and Gardens of Baden-Württemberg

Straight out of a fairy-tale: Hohenzollern Castle

Hohenzollern Castle, one of the most impressive fortresses in Germany, is perched on a hilltop in the Swabian Mountains. It looks like a fairytale castle from centuries ago, but it is actually a fine example of 19th-century Gothic Revival architecture. The seat of the Prussian royal family and the Princes of Hohenzollern impresses with stunning views. As Kaiser Wilhelm I said after a visit in 1886: "The view from Hohenzollern Castle is really worth the journey." And that is still true today.

Another highlight is Sigmaringen Castle, perched on a cliff above the Danube River, with its grand state rooms and the largest private gun collection in Europe. Originally built as a fortress, it had been transformed into a royal residential palace with towers and turrets, bay windows, and terraces.

Just north of Stuttgart, Ludwigsburg Palace consists of 18 separate buildings, with 450 splendid rooms. Along with the palace gardens and the mini-palaces of Favorite and Monrepos Palace, Ludwigsburg Palace is the largest and most beautiful baroque complex in Germany. Take your time to enjoy it!

Echoes of past glory: Heidelberg Castle

High above the Neckar River, the magnificent ruins of Heidelberg Castle loom over the romantic city of Heidelberg. The castle is not only one of the most famous attractions in Germany, it is also one of the most important Renaissance buildings north of the Alps, with lots to see inside and out.

Schwetzingen Palace began as a small country estate, but was expanded over the centuries. Today, visitors come to see this gem of 18th-century design, with its buildings, gardens, and theater. What started out as a castle was transformed gradually into an elegant palace. In the 18th-century, this was the summer residence of Elector Carl Theodor; a powerful and wealthy prince who was also an ‘elector’, a member of the electoral college that chose the Holy Roman Emperors. But, Schwetzingen Palace is even better known for its beautiful gardens – a must for green thumbs. Take time to enjoy fine examples of various styles of garden design, from the geometric baroque to the natural English landscape style. 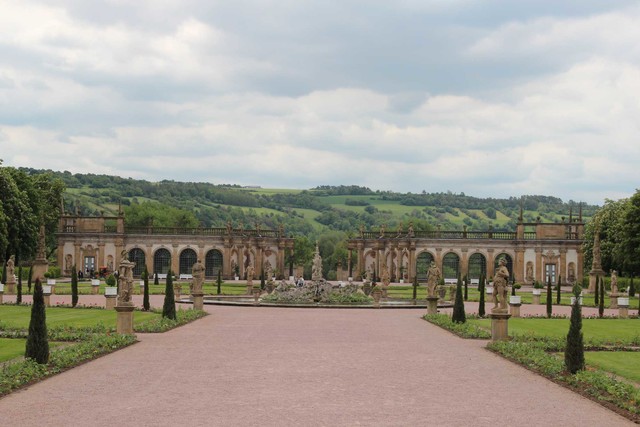 On the foodsteps of kings and queens and monks